Cookies are small text files that can be used by websites to make a user's experience more efficient. The law states that we can store cookies on your device if they are strictly necessary for the operation of this site. For all other types of cookies we need your permission. This site uses different types of cookies. Some cookies are placed by third party services that appear on our pages.

Functionality cookies are used to remember the choices you make, e.g. your user name, log in details and language preferences. They also remember any customisations you make to the website to give you enhanced, more personal features.

Targeting cookies collect information about your browsing habits to deliver adverts which are more relevant to you and your interests. They also measure the effectiveness of advertising campaigns.

This site uses cookies and related technologies for site operation, analytics and advertising purposes as described in our Cookie Policy. You may choose to consent to the use of these technologies by clicking on the “Accept All” button. To consent to certain categories of cookies, or to Reject All cookies, please click on the "Manage Settings" button.

Among the celebrations, there was a touching tribute made at the Car Dealer Used Car Awards 2017...

Snows were humbled by the dedication made to our late founder, Geoff Snow, who received the 'Lifetime Achievement' Award on 27th November 2017.

Hundreds of motor trade professionals have paid tribute to our late founder, Geoff Snow, a man who we continue to proudly bear his surname on dozens of our franchises across the South of England.

Influential members of the motor trade stood up to applaud the memory of Geoff Snow of Snows, one of UK’s leading independent motor retailers, at the Car Dealer Magazine Used Car Awards in London.

Geoff, who lived in Romsey, retired in 2007, with Stephen taking over as chairman of the group, which is headquartered at Snows House, Second Avenue, Millbrook, Southampton. Geoff’s funeral service took place at Romsey Abbey on September 22nd. Inscribed on the order of service were these words: “Love’s Last Gift – Remembrance.”

Geoff left behind his wife of 57 years, Joyce, three children, nine grandchildren and a great grandson.

Poignantly, his son, Stephen, was among a delegation from Snows to witness the award, with a photograph of a beaming Geoff shown on the stage screen.

Our group chairman, Stephen Snow, said: “It was an incredibly touching tribute from the industry my father loved and served since he entered the retail motor market 38 years ago in Southampton. I cannot put into words how much this posthumous commendation means not only to my family and me but to all of the Snows staff as well.

“As I said at the time of my father’s passing, his legacy very much lives on in the company name and the pioneering culture he instigated and oversaw with his trademark driving spirit, with exemplary customer service at the heart of everything.” 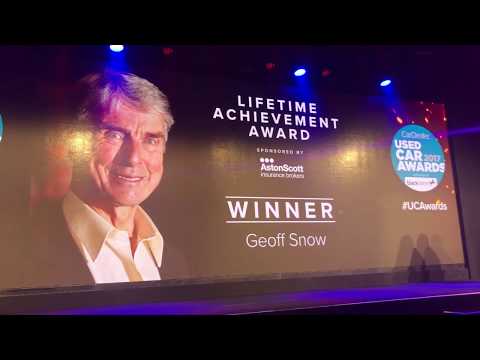 Snows was originally established by Geoff 55 years ago, in 1962, as an office supplies company in Southampton.

It was Snows Business Forms, a print manufacturing company he founded, which opened Geoff’s eyes up to the motor retail market.

The firm, which operates from a 27,000 sq ft facility in Millbrook, Southampton, and has been trading for more than 40 years, supplies more than 20 of the UK’s largest motor manufacturers, along with around 10,000 commercial customers.

In 1979 he invested in St James’ Toyota Centre in Southampton, the first full introduction to the retail motor trade, with various franchise deals following.

Snows has 42 dealerships across the South of England, stretching from Plymouth to Guildford, and including the Isle of Wight. The Group prides itself on its reputation and dedication to delivering excellent customer service, and is rewarded by the fact that over half of its business comes from returning customers. With Snows, driving becomes an experience, rather than a chore.

Company Info
Back to top